Posted at 22:55h in Syracuse by Carl Corry 0 Comments
Share

For my Emerging Media Platforms class at Syracuse, I was tasked with developing a field test using one of the technologies we had discussed in class and testing a hypothesis based on that field test. Below is the summary of my full report and results, along with a working model. Here’s the full report.

As media companies from the New York Times with its Daily 360 videos to USA Today with its recent ride in a Blue Angels plane, the use of 360 photos and video is become more commonplace or visually stunning stories. I sought to test whether the technology — combined with the annotation program Viar360 — could also enhance the storytelling experience of a restaurant profile, or if readers accustomed to straight text would find them an annoyance.

The idea was to not only wow people with an immersive photographic experience that would give them a sense of what the restaurant looked like from different vantage points in a way that hadn’t been done before, but also provide details that added value to the story. That could include bits of information, photos, or even audio and video (I did not includ 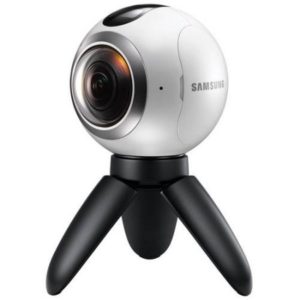 360 cameras are increasingly being used by media companies for various stories, and their usage will only grow as they become more ubiquitous, cheaper and easier to use. I chose the Samsung Gear 360 because it was highly rated on numerous camera bulletin boards and shopping sites, and it is what that New York Times is using for its Daily 360 project. The camera is equipped with two 180-degree, 30-megapixel lenses and is splash- and dust-resistant. You may opt to use only one lens, either the front or rear, or both at the same time for the full 360-degree experience.

I had considered several scenic restaurants with good lighting for the setting of my field test, but chose to go with a new H20 Seafood & Sushi-East Islip, which I had learned would be opening in the coming days. This would not only be a good opportunity to write about the restaurant’s opening, but I liked the sneak-peek factor to attract readers.

At H20 Seafood & Sushi on Dec. 10, I started by taking some regular photos with my DSLR of the restaurant, which was still in final stages of renovation, but plenty good to shoot. I then used the Gear 360 and took photos in several locations.

In the Viar360 editor, I used the photo of the restaurant’s center as my starting point to get to other places in the presentation. I added annotations and photos about the bar, the chef and the new sushi bar, and created transitions to the other two locations. Each photo needed transitions to get back to the starting point.

Here’s the final product and the story (continued below):

According to Viar360’s analytics, the presentation garnered 2,150 views and 1,337 unique visitors as of 10:50 a.m. Dec. 23. Considering this is a pre-holiday week, that is pretty impressive.

A majority  of people who responded to an online survey (9 out 16, or 56.25 percent) said it was “a great experience” and that “all restaurant profiles should include them.” The remaining people surveyed said:

The vast majority of respondents also rated the inattentiveness and quality of the experience positively.

Based the feedback, engagement and my personal impressions of whether this was a good value-add to the storytelling experience of a restaurant profile, the answer is yes, with the caveat that there is a lot of room for improvement. I feel I accomplished what I hoped to achieve in this field test, despite technical snags. Readers were given an inside look at restaurant in a new way even before it opened and the vast majority, according to my survey, enjoyed it.

My field study touched on only a few things that the Samsung Gear 360 can do. It can also shoot 360 video and record looped video and time-lapsed video.

For my target audience of restaurant-goers and foodies, I could see this being used for quick, social media-friendly behind-the-scenes shoots with a chef preparing a signature dish, or a time-lapse video to show a day in the life of a busy restaurant. I also don’t think we should have to depend on the app to stitch and share content. Do it through voice activation.

Overall, I think 360 photos and video will only grew in use, maybe not as much as drones have in recent years, but they will grow fast. There are a number of YouTubers doing 360 videos, and years down the road, when someone develops a technology to defy gravity, I can see Gear 360-like devices following vloggers around everywhere in real time. YouTube already allows 360 live streaming and Facebook started testing it earlier this month with a National Geographic broadcast from the Mars Desert Research Station in Utah.

Come to think of it, 360 photo abilities are likely to be incorporated into every smartphone at some point, which will lead to greater use of virtual reality glasses (once they come down in size and price), so expect to be immersed in everyone’s lives like never before.