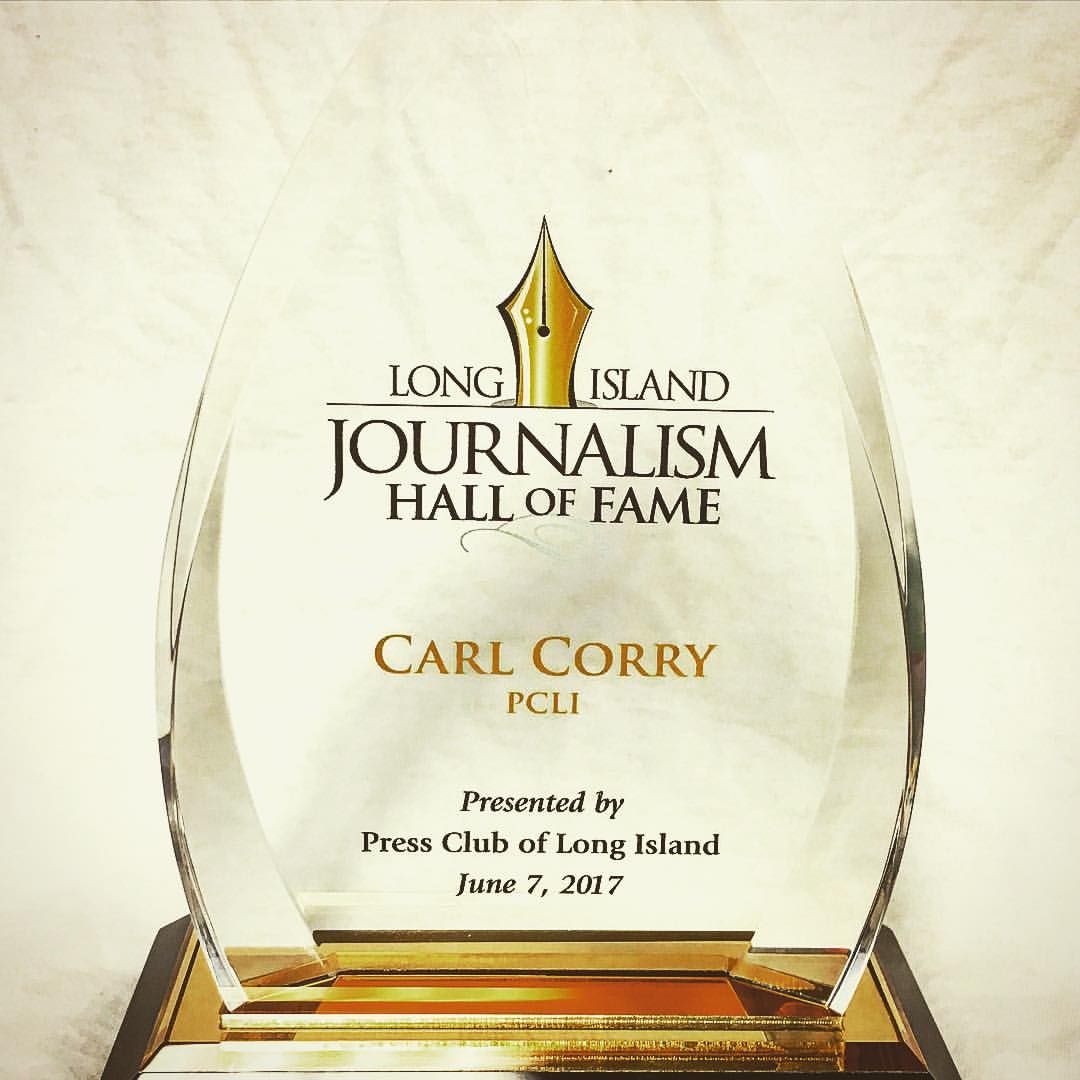 16 Jun What an honor: My induction into the Long Island Journalism Hall of Fame

A few years back, the Press Club of Long Island added a “contributors wing” to the Long Island Journalism Hall of Fame. It honors individuals for their service to PCLI, the local journalism community and the Society of Professional Journalists.

To my great surprise, the PCLI board selected me this year, alongside new Hall of Fame inductees: the legendary late Jimmy Breslin and Helen Rattray, publisher of the East Hampton Star.

It was a great night, in large part because my mentor and friend Paul Schreiber, the founding undergraduate director of the Stony Brook University School of Journalism, inducted me into the Hall.

Congratulations to all PCLI Media Awards winners. Here’s a taste of my prepared remarks.

Thank you, Paul. You’ve been an inspiration and a true friend.

Paul is retiring this summer after many years at Stony Brook. He kept a journalism minor alive almost single-handedly until the School of Journalism was established and he was named its founding undergraduate director. A new scholarship was established in his name this year. Let’s give him a round of applause.

You know, when I first learned that I was selected for this honor, I thought, “Am I really that old?” But the truth is, I’ve spent entire my entire adult life involved in with SPJ and PCLI.

It started about 23 years ago when I met a scary guy named Bill Bleyer. He was a Newsday reporter who thought everyone should be one, too. He and another Newsday reporter at the time, Stu Vincent, a very nice fellow who now works at Farmingdale State College, came to share their insights with students at St. John’s University about how to get a job in journalism.

I was so impressed by their professionalism and genuine desire to help fledgling journalists. Their enthusiasm made me and the other students want to be part of this bigger thing called SPJ and all it stood for. Standing up for the First Amendment. Encouraging ethical journalism. Providing continuous learning opportunities. Networking.

I quickly learned Bill wasn’t so scary. He just tells it like it is and I rely on his sage advice and support. Right now I am sure he is in Alaska telling me to keep this speech to under 5 minutes.

It was also around that time at St. John’s that I first met the legendary Bob Greene, who came to talk about his experiences as an investigative journalist. Bob, as many of you know, helped form Investigative Reporters and Editors and was also PCLI’s second president. And while I never took one of his classes at Stony Brook or Hofstra, he once said he considered me an honorary Greene pup, and he would occasionally give me a call to see how things were going. His caring for the larger journalism community was infectious.

In all that I’ve done with PCLI and SPJ I’ve tried to follow their example, and this honor means more than I express.

I want to thank John Kominicki, my former boss at Long Island Business News, Pat Dolan from my time at News 12 and Newsday’s Editorial Director Debby Krenek for supporting me and the Press Club all these years. Without your efforts, and those of newsroom leaders everywhere, professional growth opportunities would be diminished and, by extension, so would the ability to achieve the many great things you all are being recognized for today.

I encourage you all to join us at a social, participate in a program or workshop, or volunteer for a committee. Maybe you’d like to help with programming, social media, the awards dinner, the holiday party or our upcoming news literacy efforts.

Thank you to all the board members I’ve worked with over the years. I’ve learned so much from you, shared many laughs, and I wouldn’t be standing here without you.

Thank you to my mother, Mary Occhino, who is here and no doubt saw this coming. Lately, she’s been full-on Italian mom and has been carrying my resume around and harassing people wherever she goes to let them know I that would be receiving this award and that I recently got my master’s.

To my father, Mario Corry, for believing in me and supporting me through the years.

Most of all, I want to thank my wife, Angela, who has been incredibly supportive as I’ve volunteered for various roles over the years and urged me to go back to school, even as we’ve scraped by to let me do so.

No honor is based on one person’s achievements. I accept this on behalf of everyone who has contributed to the Press Club’s success and supported me over the years. I’m only just beginning. And I look forward to working with you all in the future.

Thank you very much.