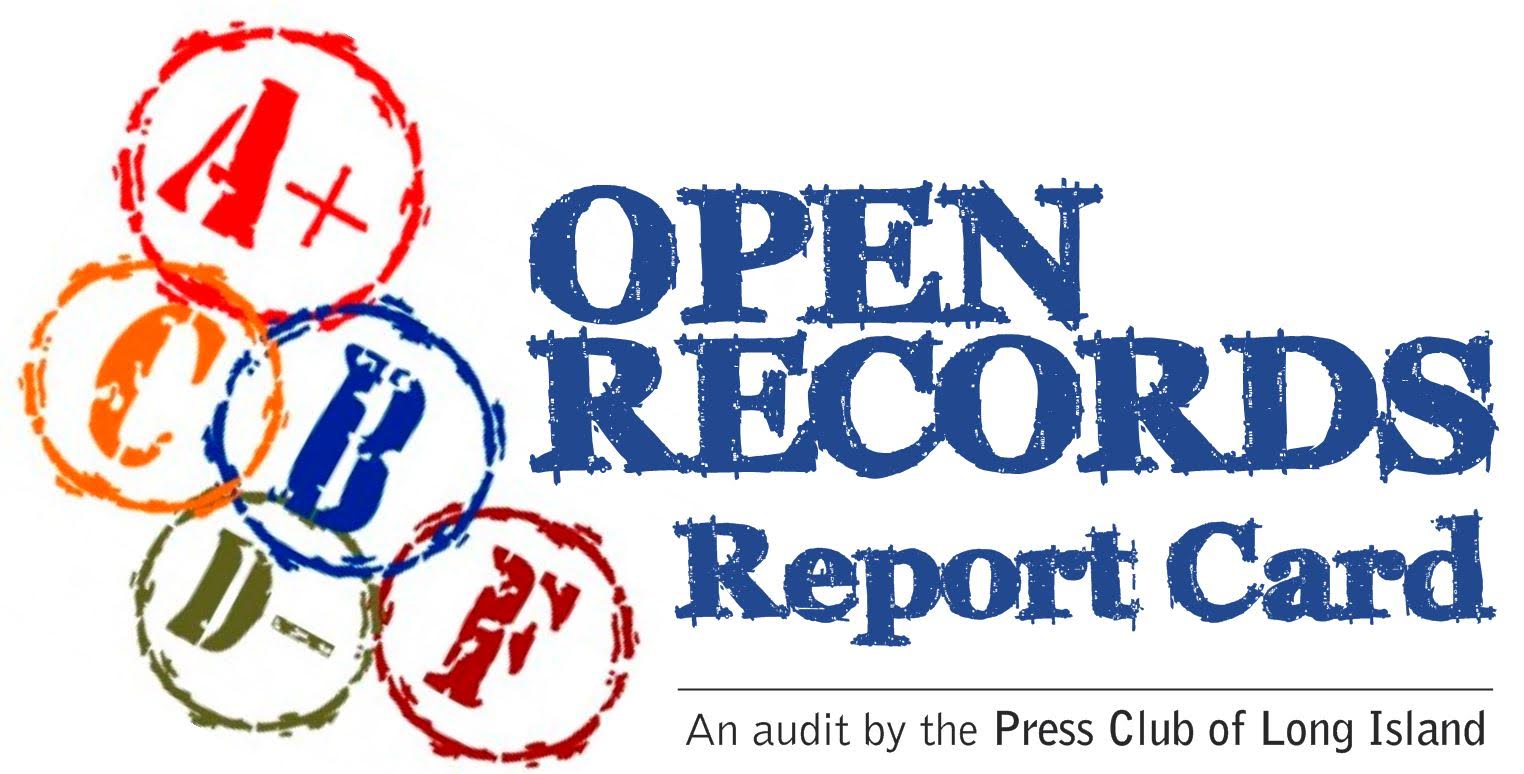 A number of Long Island governments have made changes to their open records practices or are establishing best practices to comply with the state Freedom of Information Law following an audit by the Press Club of Long Island.

The audit was the basis for press club’s Open Record Report Card release on March 13 for national Sunshine Week. The governments and agencies audited averaged a C grade on the report card. Nassau County agencies averaged a D+. Suffolk agencies got a C+. The 13 towns and two cities in the audit averaged a B. And the average grade for the 96 villages was C.

See how your municipality scored | Data

The Freedom of Information Law is meant to ensure public access to public records, allowing citizens and journalists access to information needed to make informed judgments and hold government accountable. But as the press club audit shows, municipalities routinely fail to comply with the law.

‘I let this fall through the cracks’

Mayor Michael McGinty of the Village of Island Park, the worst-performing village with 0 points, or an F, said the village has put “all its energies on rebuilding the infrastructure of the village” since superstorm Sandy. That includes planning a new drainage system, to flood control, to replacing fuel tanks at the Department of Public Works garage. A new village hall is also being built. The previous one was destroyed by the storm.

“Not being trite, but all the moons weren’t in alignment and it’s unfortunate, but I let this fall through the cracks,” McGinty said. “It truly is unfortunate, because the whole world would see the Village of Island Park is understaffed, underpaid, overworked — and they are the most competent and caring staff, chock full of compassion and empathy, and all they want to do is the right thing.”

In response to the audit’s findings, McGinty said the village has a records retention officer that will in part be dedicated to village’s FOIL obligations and a FOIL review officer. They will track all FOIL requests and keep a “tickler file to make sure we respond appropriately,” McGinty said.

“And make no mistake, I take responsibility for this,” McGinty added. “Going forward, we will take all the corrective actions, not only for our stakeholders, but for the general public at large.”

Vanessa Baird-Streeter, a spokeswoman for the Suffolk County executive’s office, which scored an F, said the county has analyzed the report card and is putting together training for FOIL officers at all of its agencies. The county is also looking to make its FOIL request forms easier to find

Greenport Village Mayor George Hubbard Jr. said his government “must do better” when informed him of the municipality’s “C” grade in January. Hubbard said he was planning to bring the issue up for discussion at the village’s next work session. Village Clerk Sylvia Pirillo said on Monday that had not yet happened, likely because the village is focusing on major contract negotiations with PSEG Long Island.

She said the village has improved its responsiveness since the press club filed its request in November 2015 by streamlining the FOIL request process and adding technology such as scanners to digitally archive documents. The village also has more staff to help.

“The village committed to providing information to the public and doing so in a timely basis,” Pirillo said, adding that Reclaim NY identified Greenport in a report released last May as among the villages on Long Island that completed a FOIL request for its 2014 checkbook.

The press club asked for more information in its audit, which was conducted over 16 months by Timothy Bolger, freedom of information chair of the press club, the local chapter of the Society of Professional Journalists.

The press club’s report card mostly graded the local governments and agencies on the following requirements specified in FOIL: whether they responded to records requests within deadlines; if they provided documents they are required to maintain; if they denied requests in writing; if they identified their FOIL denial appeals officer; if PCLI had to appeal a denial; and if they emailed the documents when requested.

They were also graded on two criteria not specified in FOIL: how many times PCLI had to follow up, and helpfulness, such as turning over documents well ahead of deadlines.

“Many local officials are frequently quoted touting their commitment to transparency, but what we found is that actions don’t always match the buzzwords,” Bolger said. “We are encouraged that some officials had already begun improving their responsiveness to records requests before we contacted them about their grades and others took their grades as a call to action to do better.”

‘There is simply no excuse’

Robert Freeman, executive director of the Committee on Open Government, a unit of the state Department of State that oversees FOIL, said “there is simply no excuse for failing to respond to a request.” He called FOIL “the bread and butter in terms of gaining access to information, especially from local governments, that is important to every resident of every community.”

PCLI stopped short of taking nonresponsive agencies to court to ask a judge to compel them to release public documents, which is the next step under FOIL when an appeal of a records request denial is denied.

Freeman said legislation likely to be taken up in Albany this session, if passed, would turn up the heat on agencies to comply with FOIL requirements. The bill mandates the payment of attorneys’ fees to a plaintiff when a court finds that an agency had no “reasonable basis” to deny access to a public record. Judges currently have discretion to award the payment of attorneys’ fees.

Freeman said he is “reasonably optimistic” that the bill will pass.

The best and worst

In the press club’s report card, the lowest grade given was zero, shared by the Suffolk County Office of Minority Affairs and the Village of Island Park. The minority affairs office did not respond to requests and no payroll list was provided for it by the county. Island Park was the only village on Long Island that did not respond to any attempt – eight in this case – to request its records until a comment was requested by PCLI on its failing grade.

The quickest responses came from the villages of Sagaponack and Amityville, which provided responses on the same day requests were filed. The agency that took the longest to complete its response was the Suffolk County Fire Department of Health Services – 382 days.

Freeman said Long Island’s 13 town governments likely fared better than smaller villages because of a disparity in staffing and budgets.

“But that’s not an excuse,” he said. “The Court of Appeals determined years ago that compliance with FOIL is a governmental obligation and is not a gift of or waste of public funds. It’s something that we must do.” Freeman said agencies can buy time by acknowledging the receipt of a FOIL request, but “to simply say, ‘Sorry, we don’t have time,’ – that is simply inconsistent with law, and it’s inconsistent with judicial decisions.”

The press club identified the Village of Roslyn Harbor as “the most actively resistant” to complying with its FOIL request of any village.

Valerie Onorato, the clerk-treasurer of the Village of Roslyn Harbor during the time Bolger was conducting the audit, told him, “We might not have time to entertain every whim that comes across our desk,” after requiring him to go to village hall to fulfill the request, provide identification that she photocopied and write down the reason for the request for the village’s payroll. Onorato repeatedly said: “Nothing good will come of this.” The village scored an F.

Lynbrook, one of the villages that scored an A+, “regularly utilizes the Committee on Open Government website, confers with their staff, and attends regular training that they sponsor on both the Freedom of Information Law and Open Meetings Law, village Administrator John Giordano said in an email. “We also have a deputy records access officer and a municipal village attorney as necessary to assist in fulfilling FOIL obligations under the Law.”

The Town of Huntington, which has a FOIL officer in every department, also got an A+.

Town spokesman A.J. Carter, who is also the supervisor’s FOIL agent, said Huntington takes a proactive approach to making information available, so citizens don’t have to go through the FOIL process at all. Huntington, Carter said, streams and records meetings of its town board, zoning board of appeals and planning board and stores them on its website. It also keeps minutes, property records and building permits online.

“It’s there for people to find,” Carter said. “And when people call, we tell people, ‘Let me show you how to find it.’”

(Note: I am a board member of the Press Club of Long Island)